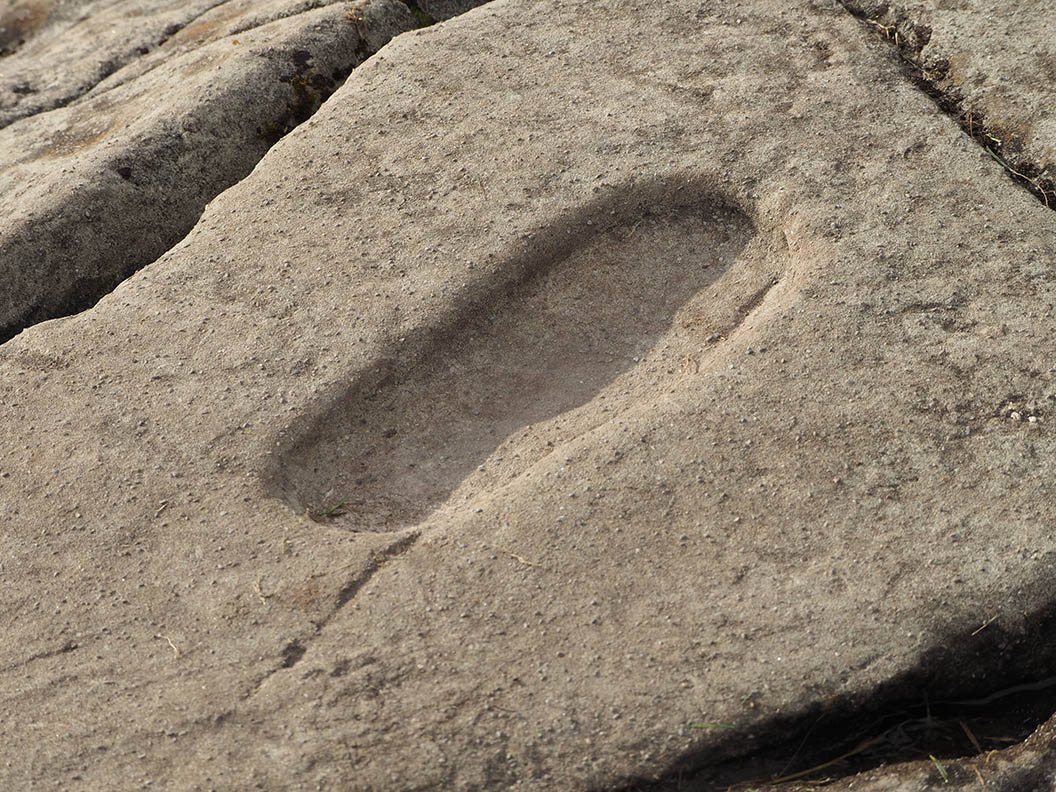 I thought I had a bit of a grasp of Dal Ríada. Pass Notes style maybe, not extensive. It was a sort of colonial job by 5th century Irish from the North, extending their territory into what is now Argyll and the southern Hebrides, in western Scotland. The Isle of Iona, the monastic centre founded by Colmcille/Columba, was the seat of religious authority, with the royal seat and capital at the fort of Dunadd. There was a lot of territorial tug o’ war with the Picts in the East, in which one would prevail for a while, then the other. Finally the two kingdoms fused into the kingdom of Alba when Kenneth MacAlpin (a Gael by most accounts) came to the Pictish throne. The “Burth of Scotland”, as Neil Oliver would say. Of the two kingdoms, only the language of the Gaels survived (as Scots Gaelic) and we know very little about the Pictish language, which is thought to have been a Brythonic tongue, related to Welsh and Cornish. Its echoes are mostly in placenames now.

We approached Dunadd from the south, taking time to see “cup and ring” rock markings around Kilmichael Glen (see image below). A lot of the land around this part of Scotland is surprisingly lush, with beech woods growing right on the coast, and the sense of a temperate climate, quite distinct from some parts of the highlands. We were lucky to encounter a group from an archaeology field-school who were surveying a cup-marked stone called the Lion Stone at Kilmichael. They gave us great advice about where to go and what to see. There are some amazing arrays of ancient rock art up mad trails in the forestry nearby, and it’s notable that the heartland of Dal Ríada was in an area that had been culturally important many centuries earlier. The Kilmartin valley, in which the royal citadel of Dunadd is situated, has a linear series of cairns, stone circles and stone alignments from the Neolithic and Bronze ages.

Dunadd itself, between Kilmichael Glassary and Kilmartin village, is a classic stronghold-on-a rocky-eminence, reminiscent of Cashel or Dunamase in Ireland. It may once have been an island in a shallow bay. There are traces of Iron Age occupation before the establishment of Dalríada, and carving of a boar in distinctly Pictish style, but most of the remains relate to the period of the Gaelic kingdom, Dal Ríada (or Dalriata, etc.). At the height of the fort there is a carved impression of a footprint which (it is believed…) was used in the inauguration of kings. It’s a powerful place, with great vistas off down the valley and to the coast. When you get to that rock with the footprint, you just have to put your foot into it.

Many, many miles later, in Aberdeenshire, we learned something about this stone that I will never forget, but I’m going to keep that up my sleeve for now.

Cultural identity… it’s such a conundrum. The genetic researcher Brian Sykes visited much of Britain with his team of DNA samplers more than a decade ago, as part of the “Blood of the Isles” project. Apart from the DNA results, his team also recorded cultural attitudes among the people whose DNA they were testing, and these are interesting. In Western Scotland, many subjects expressed an interest in finding that they had Irish roots. In the North and East, that was not regarded as a desirable outcome, with Viking ancestry being seen as a definite bonus, and Pictish connections a good second best.

When I started to read about Dal Ríada from the point of view of Scottish historians, I came up against the fact that my understanding of it was coloured by Irish narratives, which may perhaps give too much weight to the Irish dimension. Scots tend to see Dalriata (their favoured spelling) as much more a distinct community holding lands in both Scotland and Ulster, and speaking a Gaelic tongue from the mists of time, rather than an Irish colonial venture. There’s something in this I suspect – it’s too easy to transfer modern nationality values onto these long-distant belongings and movements.